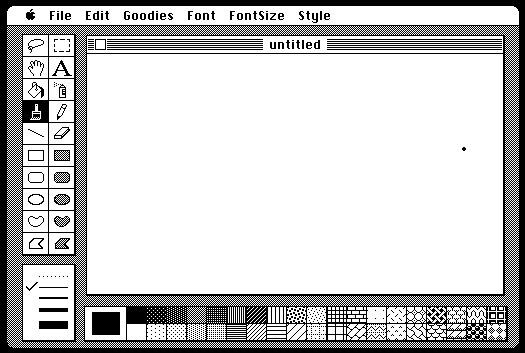 MacPaint is a raster graphics editor developed by Apple Computer and released with the original Macintosh personal computer on January 24, 1984. It was sold separately for US$195 with its word processor counterpart, MacWrite. MacPaint was notable because it could generate graphics that could be used by other applications. Using the mouse, and the clipboard and QuickDraw picture language, pictures could be cut from MacPaint and pasted into MacWrite documents. Pictures could also be cut from MacPaint and pasted into the resource fork of any application via ResEdit, allowing application internationalization.
The original MacPaint was developed by Bill Atkinson, a member of Apple's original Macintosh development team. Early development versions of MacPaint were called MacSketch, still retaining part of the name of its roots, LisaSketch. It was later developed by Claris, the software subsidiary of Apple which was formed in 1987. The last version of MacPaint was version 2.0, released in 1988. It was discontinued by Claris in 1998 because of diminishing sales.
MacPaint was written by Bill Atkinson, a member of Apple's original Macintosh development team. The original MacPaint consisted of 5,804 lines of Pascal computer code, augmented by another 2,738 lines of 68000 assembly language. MacPaint's user interface was designed by Susan Kare, also a member of the Macintosh team. Kare also beta-tested MacPaint before release.
MacPaint uses two offscreen memory buffers to avoid flicker when dragging shapes or images across the screen. One of these buffers contained the existing pixels of a document, and the other contained the pixels of its previous state. The second buffer was used as the basis of the software's undo feature. In April 1983, the software's name was changed from MacSketch to MacPaint. The original MacPaint was programmed as a single-document interface. The palette positions and sizes were unalterable, as was the document window. This was different from other Macintosh software at the time, which allowed the users to move windows and resize them.
The original MacPaint did not incorporate a zoom function. Instead of a zoom function, a special magnification mode called FatBits was used. FatBits showed each pixel as a clickable rectangle with a white border. The FatBits editing mode set the standard for many future editors. MacPaint included a "Goodies" menu which included the FatBits tool. This menu was named the "Aids" menu in prerelease versions, but was renamed "Goodies" as public awareness of the AIDS epidemic grew in the summer of 1983.
MacPaint was first advertised in an 18-page brochure in December 1983, following the earlier announcement of the Macintosh 128K. The Macintosh was released on January 24, 1984 with two applications, MacPaint and MacWrite. For a special post-election edition of Newsweek in November 1984, Apple spent more than US$2.5 million to buy all 39 of the advertising pages in the issue. The Newsweek advertisement included many pages dedicated to explaining how MacWrite and MacPaint worked together. After launch, a New York Times reviewer noted how MacPaint unfolded numerous graphic possibilities for the personal computer; he went further to say "it is better than anything else of its kind offered on personal computers by a factor of 10."

https://computerhistory.org/blog/macpaint-and-quickdraw-source-code/
Reviewer: GeMir - - April 17, 2017
Subject: Does Apple know about this upload?
Is there a permission from Apple to upload this software?